It looks like we have a long journey ahead of us to reach the dream goal. Fully working and fully open source linux smart phone is a damn difficult task. What have been achieved since the last post?

The Web browser application is one of the most frequently used applications. There are many requirements on it. When I started with PinePhone I was testing different operating systems such as Ubuntu Touch, postmarketOS with Phosh, Plasma mobile and so on. One of the tests was web browser. The experience was mostly terrible. The browsers was slow, crashing time to time, or rendered pages incorrectly.

I packaged the glacier-browser and added some minor changes. It is very very very simple. It has just an address line, repeater with WebEngineView, bookmarks and browsing history. I have replaced WebKitView by WebEngineView and added bookmarks. You can see on the screencast that I haven’t even fixed the address line behavior yet (the same address stays there all the time).

Many people recommended to getting rid of Chrome based Qt WebEngine in favor of gecko-dev, qtmozembed-qt5, and sailfish-components-webview. The long story is that Firefox is not developing mobile optimized firefox. Jolla people are keeping that alive with security fixes and so on.

One possible way is to use non-glacier browser. It could be midori or desktop Firefox. There is an mobile-config profile for Firefox to get it mobile friendly.

Back to nemo packaging

I continued with attempts to recompile manjaro based nemo packages for aarch64. There were multiple iterations and dozens of commits. The deploy.sh is using buildarmpkg -k -p package, where -k stands for keep build root. Hence dependencies were missing.

There was very random error during build of qmake based project. The arch/manjaro’s makepkg adds -j $number to every make command. After addinig -j 1 to every make install the issue disappeared. I wasn’t able to find exact place of problem, but I have created an QTBUG ticket on qmake.

When I was rebuilding mkcal, I have found, that we are using wrong paths with cmake. It was most likely caused by copy paste from some other project. For most of projects it was working correctly, but in the end the libmkcal.pc had incorrect prefix entry, which caused errors in build of its dependencies (contactsd package).

I was looking into glacier-settings and I have found and changed a few things:

The qt-virtualkeyboard was abandoned in favor of Maliit. Now, the variable shoud be as follows:

I was facing many challenges when I was building own image. First, there is a parameter quiet on /proc/cmdline by default.

This could be overridden by editing of command in grub in KVM or by editing of /boot/boot.txt and running ./mkscr in same directory on PinePhone. Unfortunately, you have to wait until everything fails and console on tty is started.

This could be a little bit tricky, because the unit may cause failure of everything and avoid startup of shell. This has a workaround on KVM. You can start early shell by changing of grub or enabling right systemd unit:

I haven’t found a way to use it on PinePhone. The terminal must be most likely started on different tty. Also it is hard to change kernel parameters without booting. There is probably some command in uboot, but I haven’t found it so far (I probably didn’t look long enough).

There were tricky error in /usr/lib/startup/booster-cgroup-mount. The script was trying to create cgroup, but it expected read-only filesystem. Previous approach was to remount it read write, create cgroup, and remount it back as read only. But following applications was expecting read/write access. If I remember correctly, many distributions were migrating from cgroups v1 to v2 some time ago. It could be related to change of its workflow.

Manjaro is upstream for nemomobile. It make sense to make tests outside, but production should follow upstream.

I have gained access to nemo-ux subgroup from @Spikerguy. Thanks! I have created an jmlich/nemo-ux repository with submodules to be able compare it side-by-side. I have moved all changes to manjaro repo, but it has to be rebuilt and pushed into community repo.

For build it self could be used and is used gitlab ci. Pushing into repository is done manually. For that reason, some packages cannot be built.

In the end, I was able to create an bootable image \o/

If you want to test latest and greatest build:

(3) wait 3 minutes during boot until mce fails. quiet parameter suppressed most of messages.

Easy task to start with

In repository glacier-home is app launcher and it contain folder view. There is something broken with its rendering. 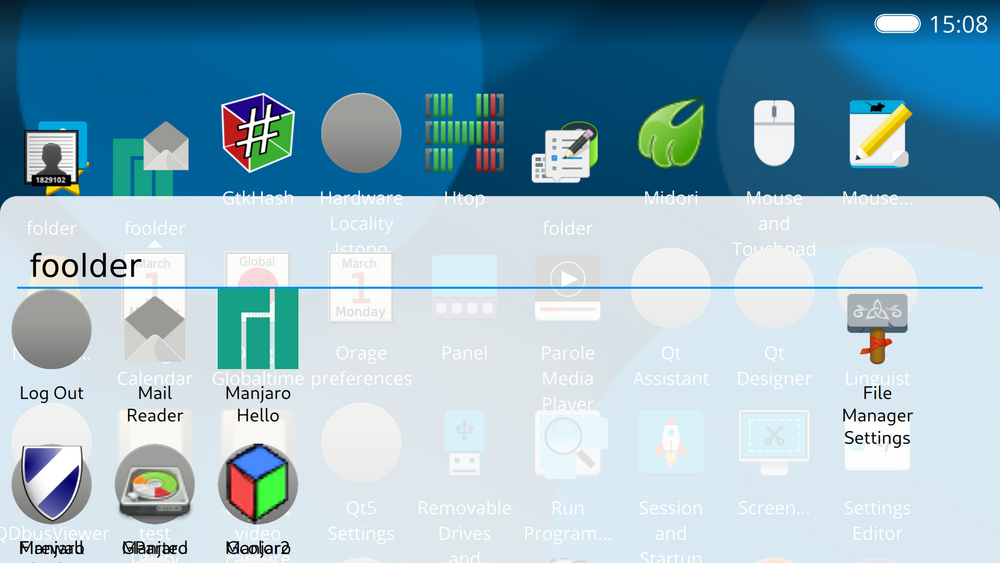 I hope you will take a look at it (-; I am looking forward to your questions and contributions.